When she was just nine years old, Marguerite Weber spent a year living at the Queen Alexandra Solarium for Crippled Children (QA) in Mill Bay. Little did she know that QA would be a part of her life for years to come, as she became involved with the very organization that started the Solarium in the first place, the Women’s Institute.

As a part of three generations of women in her family to be a member of the Women’s Institute (her mother was a member, and now her daughter is as well), Marguerite has spent a great amount of her adult life giving back to the community and helping women and families likes hers find the help and resources they need. Today, Marguerite looks back on her year at the Solarium with the fondest of memories and credits it as the reason she is alive and healthy today.

From Pender Island to Mill Bay

Growing up on Pender Island, Marguerite wouldn’t let anything hold her back from being just like every other kid out playing in the fields amongst the hay bales. However, this wasn’t great for a young girl with asthma.

With Marguerite’s father having passed away when she was four years old, her mother found support in a couple from Victoria who had become close friends of the family. They would often make trips over to Victoria to visit these friends, and when they saw Marguerite’s health declining, they decided to get her in to see a doctor in Victoria, as there were no doctors on Pender Island at the time. The doctors expressed to Marguerite’s mother that it was unlikely she would live through her teens but suggested she go to the Solarium to see if there was anything they could do to help Marguerite’s asthma.

Life at the Solarium

The trip to get to the Solarium was unchartered territory for Marguerite. She was going to a place she had never been before, away from her family, and she had no idea how long she would be there. But this all didn’t seem to be too much of a problem for young Marguerite, as she recalls it didn’t take very long for her to feel at home.

“The kids at the Solarium became like my family. It was so nice because all of the girls in the ward were my friends. At home on Pender, my closest friend lived two miles away, but at the Solarium my friends were as close as the beds beside me.”

Marguerite enjoyed the day to day activities at the Solarium, including attending school classes such as math and spelling. She loved doing crafts, and the nurses at the Solarium even taught her how to knit. On days when the weather was decent, the nurses would roll the beds out to the long veranda overlooking the ocean where the children could take their afternoon naps in the sun.

[Marguerite shared this photo from the Solarium in 1936. We believe she is in the second row from the top and four in from the left, behind her friend Jean in crutches!]. 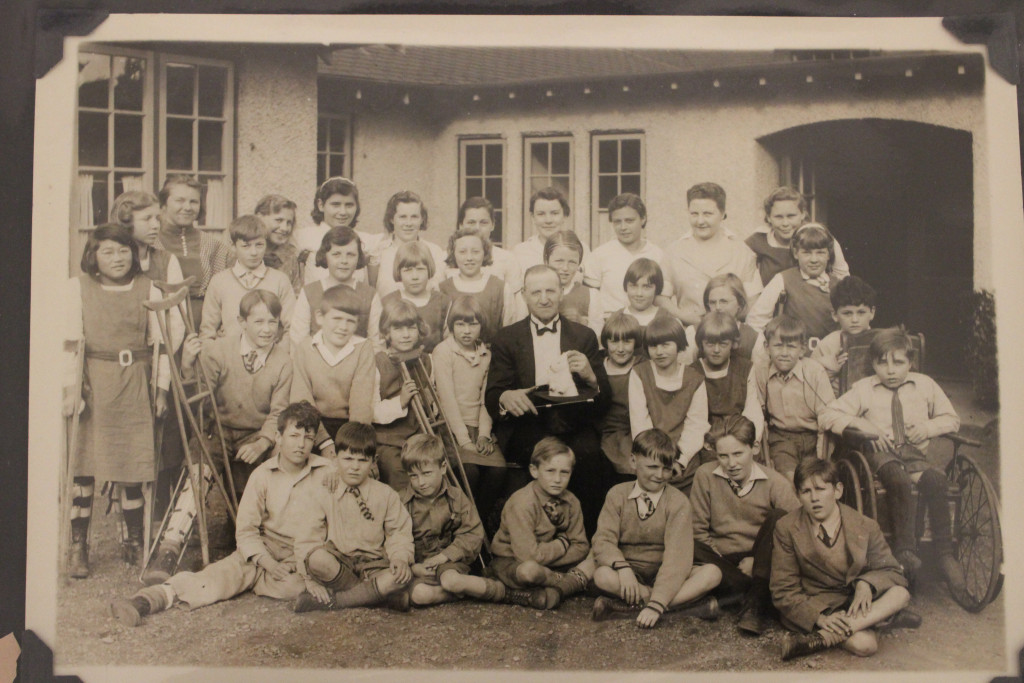 Marguerite got along with all the children staying at the Solarium, but there was one girl, Jean, that became her best friend.

“We had so much fun together.”

Though she never asked, Marguerite believed Jean was in the Solarium to treat her polio as she had a lift on one of her feet and couldn’t walk on the other one. This didn’t stop the two of them from getting into some mischief from time to time.

“We got into some things we shouldn’t have. Jean was not supposed to walk without her crutches, but when we went to play on the upper lawn, she would throw her crutches down and play with the rest of us. The only problem was, we would regularly get our shoes inspected, and the nurses would wonder why Jean’s shoes were so dirty. One day, when we were coming back from playing, we were told it was time for a shoe inspection. Well I devised a plan to keep Jean from being caught by getting her to come around the back and I pulled her in through the bathroom window so we could wash her shoes off before the nurses could see us.”

The two of them were inseparable during Marguerite’s time at the Solarium, but they lost touch once she left. Though Jean lived in Victoria, they never saw each other again as kids. It wasn’t until almost 40 years later their paths would cross again.

“I decided to attend an event at QA for past patients and supporters of QA who were interested in joining a volunteer group called the Pioneer Club. When I arrived there, I was explaining to a friend that I had a stayed at the Solarium as a girl when a woman overheard me and asked my name. I told her my name and she responded, “I’m Jean!” And this was my friend! We had found each other again all these years later.”

“I was very proud when I made the connection between the Women’s Institute and the Solarium. I was proud to tell the other women that I had stayed there for a year and it had done me some real good.”

Around this same time, Marguerite also became a member of the Pioneer Club, which was a volunteer group that supported QA.

When asked why she continues to give back to the community through the Women’s Institute and previously the Pioneer Club, she expressed that a portion of it comes from her gratitude for the care she received when she was a patient at the Solarium.

“I sort of feel that maybe the different things I’ve done with the Women’s Institute and Pioneer Club has in a way repaid a little bit for my stay at the Solarium, which we were so generously given for free. Now I’m almost 92 years old and I’ve never had any problems with asthma since. I truly can’t say enough about QA. I mean, I’m alive today because of it.”

Today, Marguerite lives in Esquimalt and is an active member of the Women’s Institute along with her daughter. She still knits to this day.