For retired Campbell River couple Al and Gay Ruff, giving back has always been an essential part of who they are. After their son and daughter-in-law decided to grow their family through adoption, Al and Gay wanted to help with some of the fees.

“I asked our neighbours if we could collect the refundable items from their recycling bins to help raise money to put towards bringing our new grandchildren home from Haiti. And of course, everyone said yes. Surprisingly, it wasn’t that long before we had our committed amount of money,” said Al.

They quickly realized that the money sitting in recycling bins in the forms of cans and bottles could be transformed into life-changing funds for children, and KANS FOR KIDS was born. Over the past six years, the initiative has quickly grown into an almost five-day-a-week operation, through which Al and Gay collect enough cans from Campbell River and Quadra Island to donate to 23 children’s charities.

In 2019, Al and Gay brought more than 378,000 items to the return depot. Determined to break last year’s record, the couple has already collected 352,000 cans – only seven months into the year. And while Al and Gay typically have the support of a few volunteers, social distancing has meant that the couple has worked even more tirelessly to continue their work.

“For the first six weeks of the COVID-19 outbreak, it was just Gay and I. We had condos and apartment buildings phoning us and saying they had bags upon bags of cans to be picked up,” said Al. “They were long and hard days, but at the end of each day we had smiles on our faces knowing that we would hopefully make a difference in kids’ lives.”

When the Ruffs first heard about Q̓ʷalayu House, the new home away from home project in Campbell River dedicated to helping expectant moms and families with children, they knew they had to help.

After their first baby was born prematurely more than 40 years ago, he was immediately flown to the hospital in Vancouver, before there was a children’s hospital. Back in those days, parents were not allowed to accompany their newborn children in those circumstances, and it was several weeks before Gay and Al were permitted to reunite with their son. As they can empathize with the experience of being separated from their child, Gay and Al are dedicated to fundraising for Q̓ʷalayu House in hopes of keeping families together.

“I know that when ladies from the north and western region of the Island and the surrounding islands are pregnant and have health challenges, they have to be close to the hospital in Campbell River. It’s a huge expense, and many can’t bring their families because they can’t afford it. Q̓ʷalayu House will help these women, as well as families with children, considerably. It will truly be a home away from home,” said Gay.

Community members across Campbell River and Quadra Island have chipped in to gather cans and bottles to support Q̓ʷalayu House through KANS FOR KIDS. Al and Gay have made ten trips to Quadra Island alone, and each time their van has been filled to the brim with cans.

“It’s people like those living on Quadra who will need Q̓ʷalayu House. Yes, it’s only a short ferry ride to Campbell River, but if it’s in the middle of the night, it doesn’t run except for dire emergencies. Everyone we talk to about Q̓ʷalayu House is very excited about the project,” said Al. “We’re getting excellent responses from the community about what you guys are doing.”

When asked about their hopes for Island kids and families, the couple said, “we hope that they can stay together.” 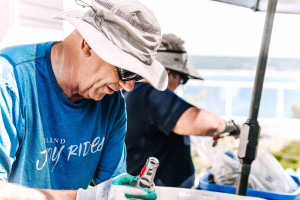 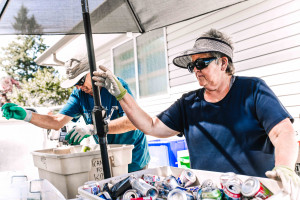 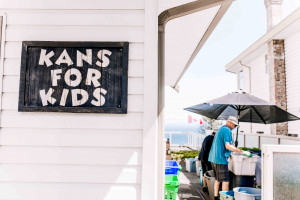